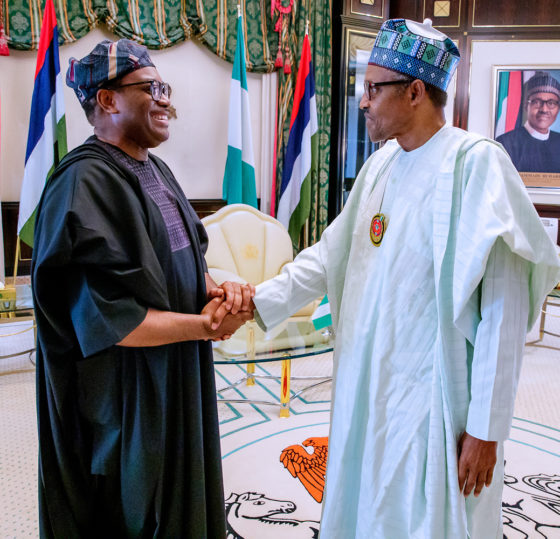 Adesina said with the continent’s $1.8trillion pension and sovereign wealth assets, it has no business going a broad to borrow to fund project.

Speaking with State House correspondents after meeting behind closed doors with President Muhammadu Buhari at the presidential villa, Abuja, the AfDB boss said that the country could address the infrastructure deficit by committing the pension funds that are idle on infrastructure.

He argued that investing in other countries sovereign wealth funds and  going back to borrow “your own money” doesn’t really make a lot of sense.

He said that he was at the State House to discuss security issues as well as how to address the country’s infrastructural gaps among other issues.

He advised governments on the continent to invest the $1.8 trillion pension and sovereign wealth assets on the development of infrastructure in Africa.

According to him, Africa had an infrastructure gap of $68 billion to $108  billion which could be adequately addressed by utilising the $1.8 trillion accrued pension and sovereign wealth funds, adding that there was the need for African leaders to invest in infrastructure development.

He said doing so would be a case of “charity begins at home”, instead of going elsewhere to seek funds for development or investing the funds.

He also explained that with good infrastructure, Africa would be better positioned to compete favourably with trading partners from other continents.

The former Minister of Agriculture said: “Today, Africa has an infrastructure gap of about roughly $68 billion to $108 billion infrastructure financing gap. At the AfDB, we have been working so hard to close that particular gap.

“When it comes to the issue of attracting capital to do that, there are three things that I will say; first, we have to also look at home. Today, in Africa, the size of the sovereign wealth fund and pension fund and insurance pull of fund (mutual funds) is about $1.8 trillion.

“If we can just tap a little part of that, we will close very quickly the infrastructure gap that we are talking about. But, you see a lot of sovereign investment funds being invested in other sovereigns outside the continent.

“So, they become the sovereign wealth of others and then you go back and borrow back your own money; it doesn’t really make a lot of sense. I say that charity always begins at home.”

The AfDB President assured that the bank would continue to support development on the continent, especially now that its shareholders had strengthened it with $115 billion.

On the proposed single currency for the Economic Community of West Africa sub-region, the Eco, Adesina described it as a good development for West African countries, stressing that with the African Continental Free Trade Area Agreement, AfCTA, coming on board, a unified currency for the sub-region also meant it would be better placed to compete with the rest of Africa.

He said, “I support the Eco fully,” he said, adding that the AFCTA is “the biggest thing to happen to Africa”.

“That free trade area itself is worth over $3.3 trillion in terms of trade. Obviously, it’s not optimum to trade in so many currencies.

“So, it makes common sense to have a unified currency and of course for that to even be achieved, the Eco; I support Eco greatly. I think it’s a great idea to do.

“But, obviously, there are a number of convergence criteria that will have to be met and I am sure that our President is talking with other presidents to be sure that they can meet those criteria and the region can be fully integrated.”