Nigerian singer, Simi, has returned to the music scene after her maternity break with a new single that will be released on Friday, September 18.

The song is titled ‘No Longer Beneficial’.

Taking to her official Twitter page to make the announcement, the new mother of one writes:

The second part of her 2014-released EP, ‘Restless’ will also be out soon. Simi titles it ‘Restless II’.

Recalls her husband, Adekunle Gold, recently took to Twitter to reveal that his wife mixed a track on his latest album titled ‘Afro Pop Vol 1’. 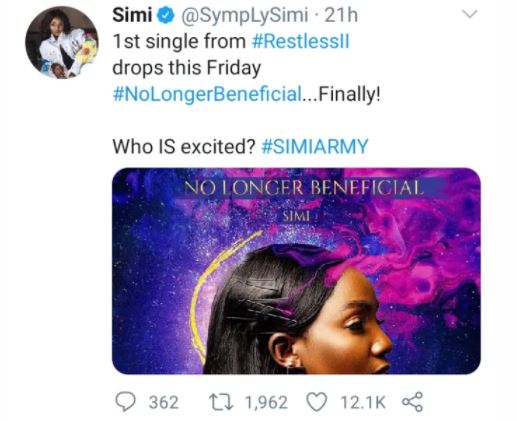 BBNaija: Erica Says She Is Happy Laycon Won And They Can Still Be Friends