I was a victim and by extension became the Chairman of the Association of victims of February 18, 2006 sectarian riot in Maiduguri where several souls perished and property worth billions of naira destroyed.

I tried as much as possible not to comment on or discuss this issue anytime it comes across my way because I am not only involved but the subject is also emotive.

However, the more I tried, the more it keeps occurring in my thought flows. The February 18, 2006 sectarian riot, now designated the “Black Saturday” in Borno, has refused to go for its sad memories of destruction, barbarism and man inhumanity to man.

In the holocaust that followed, over 50 churches were set ablaze, several souls lost in brutality, private and public buildings, commercial houses, shops and restaurants razed within a matter of hours.

It was a grand conspiracy; carefully planned and meticulously executed. The action was spontaneous and exact on targets with Christians being the ones mostly affected.

The perpetrators of this dastardly act held the innocent Christians victims in response to a cartoon drawn by a Danish Man said to have blasphemed about Prophet Mohammed.

This day of heinous crime was brought back once more to the memories of people by Bishop Naga Williams Mohammed, the current Chairman of Borno state chapter of Christian Association of Nigeria in a press interview in 2017.

In the interview, titled, “Boko Haram What Christians faced under Sheriff, Shettima” Bishop Naga went down the memory lane on the relations between the Christian community in Borno and subsequent administrations. 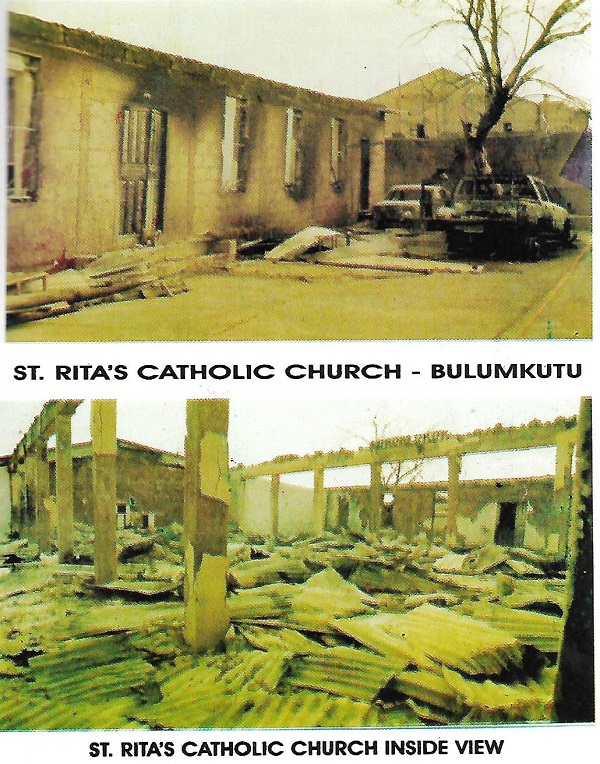 According to him, if you go back to fairly recent history, our first major problem was in February 2006, when a Danish man whom I heard was not even a Christian, drew a caricature of Prophet Mohammed.

Unfortunately, there was a protest here in Maiduguri and Christians received the repercussions. A total of 56 churches were destroyed. What struck most is that there was no compensation from the then government.

Bishop Naga pointed out that in spite of the promises made by the then Governor in person of Senator Ali Modu Sheriff, he later reneged.

He further stated that though he was a member of the Administrative Committee set up by governor Sheriff, only N150, 000 was given to each pastor whose entire church was destroyed.

Bishop Naga, however, stated that the administration of Governor Kashim Shettima has been of tremendous assistance to the state CAN as well the generality of Christians since the   Boko Haram saga began.

He explained that so far the sum of N205 million has been given to a committee set up by the state government to rebuild some of the churches burnt down by the insurgents.

The CAN chairman cited an example of Gwoza Internally Displaced Persons (IDPs) from Gwoza in Maiduguri camp, who were given N2O million while the governor directed that the Borno State Management Agency be supplying food directly to the lDPs under the Christian leadership.

As I pointed out earlier, I tried to refrain from commenting on this subject (February 18, 2006 sectarian revolt) since I was a victim and morally, one cannot be a judge in his own cause.

As a victim, I lost my property made up of 22 rooms and a bungalow of three bedroom, located at Bolori layout.

I will only re-assert the facts of the case, which are not in contention. It is a fact that the Ambassador Ahmed Jidda high powered committee, set up by Sheriff’s administration on the crisis recommended the sum of N1.5 billion to be paid as compensation to the affected victims.

It is a fact that Sheriff, as the governor pledged to pay the compensation but reneged. It is a fact that prominent Nigerians including the Sultan of Sokoto, Salad Abubakar and the then CAN national Chairman, Cardinal John Onaiyekan intervened but to no avail.

One striking aspect of the interview by Bishop Naga is the revelation that only N150, 000) was given to each pastor whose entire church was destroyed. What is this supposed to mean? Until justice is done, the memory of that Black Saturday of February 18, 2006, in Maiduguri, will not go away.

The black Saturday has refused to clear from the memory because it was the day a very dark cloud accompanied by dead silence hung over the city of Maiduguri.

It was the smoke and effigy of burning bodies of our innocent brothers, sisters, children, husbands, wives and valuables. It was a day Maiduguri, in a twinkle, of the eye recorded an unprecedented number of orphans, widowers and refugees.

The black Saturday will refuse to go because the blood of the innocent ones or martyrs that perished has become a nightmare to the masterminds of the bloody carnival who would “sleep no more”.

The day will not go as it raises more questions than answers, especially to all government officials who were on ground and were witnesses to the heinous crimes on the faithful day.

Read Also: Center calls for state of emergency in Borno

Who were the sponsors of the atrocity? Why the silence from constituted authority on the plight of the victims even after 15years? Would this be wished away as one of those orchestrated sectarian revolts aimed at provoking a particular religious sect? Was the Ambassador Ahmad Jidda committee set up by the state government that recommended the compensation of N1.5 billion for the victims a ruse? What became the fate of the so-called arrested ones? Was there diligent prosecution? These are the questions that continue to provoke and prick sane mind to date.

When our Muslim brothers in Maiduguri chose to hold a lecture on the life of Prophet Mohammed (peace be upon him) and a peaceful demonstration against the defaming cartoon against the great Prophet emanating from Denmark on February, 18, 2006, no more one eyebrow as the leadership of Christian Association of Nigeria, at both national and state level, had earlier condemned such cartoon.

The peaceful demonstration was expected to take off from Ramat Square, Maiduguri and translate into the Shehu of Borno Palace and thereafter possibly terminate at the Government House.

But this was not to be as the event was hijacked by a group acting its own script. What followed is now history known to all.

On the fateful day, a group of insignificant elements with deep rooted prejudices and acting on strict directives of their sponsors or mentors, unleashed on innocent souls an unprecedented holocaust. And Maiduguri went up in inferno, blood-letting, looting, arson and barbarism.

Though, there were conflicting figures with regards the casualties by both CAN and state government, both parties confirmed deaths and destruction of churches and other valuables.

According to Borno State chapter of CAN, 56 churches were destroyed, 100 residences, hotels, shops, offices and restaurants razed and 200 souls perished But the state government put the figures as follows: 35 residences destroyed, 52 churches burnt down, 24 shops raised and vandalized 7 hotels, 3 offices and library destroyed, 22 Persons killed and 61 other sustained injuries: While 254 suspects were arrested, out of which 176 Were: released while 76 had case to answer.

When asked recently back about the status of compensation to the victims of this dastardly act, Bishop Naga pointed out that “we requested them to pay, but they said they were told not to pay.”

The Black Saturday cries to high heavens for redress. Unless and until atoned, those who murdered the sleep “will sleep no more” as the Maiduguri Black Saturday will not rest until justice is not only done but seen to be done.