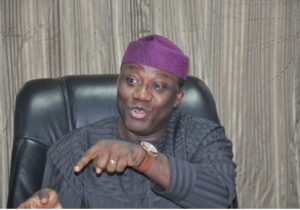 The Ekiti State Governor, Kayode Fayemi, on Tuesday, inaugurated the newly elected chairmen and vice chairmen for the 16 local government councils in the state.

He charged the council chiefs to prioritise the welfare of the people at the grassroots and make themselves accessible to them.

The new council chiefs were elected on December 7.

Fayemi, who told the new council chiefs to prioritise the welfare of Ekiti people above their personal interest, said as the people’s representatives in government, they must make “far-reaching impact on the lives of the people.”

The governor implored them to key into the five pillars of his administration which are aimed at eradicating poverty from the state and deliver the dividends of democracy to the grassroots.

Fayemi said: “As the government at the grassroots, you have to ensure that people-oriented programmes and projects are made your priorities. While you should key into the state priorities, I also expect you to develop your own with your budget estimates with the support of the Ministry of Local Government and Community Development.

“In this regard, I enjoin you all to align with the state government policies and programmes as boldly and expressly enunciated in our five-point agenda of governance, agriculture and rural development, social investments, knowledge economy, and infrastructure and industrial development.”