How my husband was swept off after rescuing woman from flood

About five months after the unfortunate death of father of two, Mr. Oladiti Moses Alo , who was a victim of the September 18, 2019 flood disaster in the city of Ibadan, the widow , Sarah, who has been virtually abandoned with her two children,  is still grappling with the rippling  effects of the loss of her beloved husband, and  breadwinner. Writhing with pains, she said life has not been the same since the sudden death of her caring husband. OSEHEYE OKWUOFU, who visited the mother of two at her Ibadan residence, reports.

In the early morning of Wednesday, September 18, 2019, the family of Oladiti Alo, at Elebun area,

Plot 3 , Peace Street , Premier Estate,  Akuru Oluyole Extension , Ibadan , woke up on a happy note.  As a Christian family, they observed the early morning prayer rituals, but the breadwinner, Mr Oladiti Moses Alo, did not have the premonition that, that will be the last day he would spend with his two children and lovely wife.

Life was quite good for the family of four, until fate turned things upside down for them later in the day.  The husband, who was a victim of the flood that ravaged Ibadan city that day, owned  a commercial taxi car, which he used to care for his family. The wife likewise owns a hairdressing saloon, with which she supports the husband to earn a comfortable living. They both fairly comfortably catered for the needs of their two teenage children who were in school.

However, the narrative changed with the tragic flood that occurred during a torrential down pour in the city last year, terminating the life of the breadwinner. He was said to have died a hero. After rescuing a woman who was trapped in the surging flood, he fell victim; he lost his stamina to the flood, which swept him away.

Since the unfortunate event, the family had remained in sorrow and pains, with the memory of the tragic death haunting them. The widow, Sarah, caved in to emotion each time she recalled the sad incident, which she described as her darkest moment in life. But she took courage, even in the face of the trial and abandonment , as she still firmly held to her Christian faith in the resurrection of the dead. “I know I will one day re-unite with my husband when the dead will come back to life”, she said calmly as she relived the tragic event.

Narrating how the news of her husband was broken to her, Sarah said: “On the fateful day, Wednesday 18, September 2019, there was a heavy rain. The flooding brought about by the rain was so serious that my children and l could not get access to the house. But we eventually got home around 9.15pm.

“All the roads were flooded. So, it was difficult for many to pass. When I got home, I did not meet my husband at home. There was no light; so everywhere was dark and it was not easy to go out.  I was worried about my husband’s fate but I was hoping that he would still show up. I felt he might be waiting for the rain to subside before coming home. But, throughout that night,  he did not come home. Before then, my son had told me that he received his father’s telephone call hours earlier that he would be coming home soon.  But our hope began to turn to anxiety when we could no longer reach him on phone. There was panic. It was bedlam. We could not sleep as we were busy calling his friends and relations. 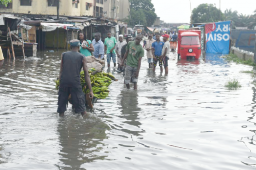 “The next day, Thursday morning, I went out again searching for him by going to where he normally visited. No luck.  Later, that day, some elders from our worship center came to meet me. They told me they had found my husband, that he was a victim of the Wednesday’s flood. I was informed that a herdsman who was tendering his cows discovered his lifeless body on top of a culvert near Zarte Company, near some bamboo trees.

“And when he saw it, he informed the landlords, who later reported the matter at the Oluyole Police Station. Later, a woman came to the house to inform us that he (my husband) was known and hailed in the area as a saviour and hero the previous day. I was told that when he saw a woman being carried away by the raging flood; he quickly dived into furious water and rescued the woman. However, sadly enough, as he was about to move out of the water, his leg slipped and he was swept  away.”

Many areas of the city were flooded in the September 18, 2019 torrential down pour.  Scores of people were trapped Was bridges and culverts were rendered impassable by the surging flood A lot of roads, bridges, and culverts were damaged , while some people lost their personal belongings.

Other areas that were affected by the flood were Alaro, Zartech, Oluyole Extension, Idi-Ayunre , Olodo,  New Garagge , parts of Gbekuba area, Apata, and Omi Adio in Ido Local Government Area of the state.

At Alaro, Zartech area of Oluyole Extension, the only bridge that links the people to the city was completely submerged by water, while many residents were prevented from gaining access to their homes.

However, the Commissioner for Environment and Water Resources , Hon. Kehinde Ayoola, who spoke with The Nation on the flood disaster, admitted that there were damages to bridges, culverts and roads by the flashes of flood , but claimed  he  did not  receive the  report of any missing person.

“The area you just mentioned, the Alaro area, Oluyole Extension area, yes, there were flashes of flood there and it also happened at Joyce B, at Olodo area of Egbeda, and at an area called Jenriyin, Kute community, in Lagelu Local Government Area. So, we have been there to make an on-the-spot assessment and we have taken note of what to be done to the hydrological infrastructure there in those places.

“There are damages to bridges, culverts and roads; fine, yes that is true and water entered people’s homes. We sympathise with such people and we are doing everything humanly possible to ensure this doesn’t occur again, “he stated.

The commissioner, while sympathising with the widow of the deceased and the entire family, said if the government had known on time, immediate action would have been taken to mitigate the effect of the loss .

“But, I will advise that a letter be written to the State Emergency Management Agency ( SEMA), formally reporting the incident . I can assure that the government through the agency will do the needful”, he said.