Precedents: When Supreme Court is asked to reverse itself 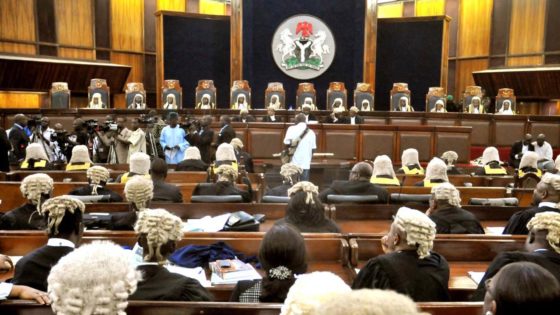 The decision of the Supreme Court, upturning the election of Governor Emeka Ihedioha of Imo State last month has been greeted with mixed reactions.

While many believe that the decision had some coloration of political bias, especially when the figures which the seven justices based their decision appeared not to have added up, others argue the apex court was right in view of the facts before it. Since the judgment, there has been series of pro and anti protests with calls on the apex court to revisit its decision.

ALSO READ: Amotekun: We either restructure or end up like Somalia — Attah

One of the earliest cases in which the Supreme Court was asked to reverse itself dates back to 1971 in the suit filed by Kobina Johnson and other vs Irene Lawanson and other.

This case is often referred to as the locus classical on the Supreme Court’s power to reverse itself on earlier decisions. The contention then was about the application of section 129 of the evidence act with regards to the duration within which a deed of assignment can be valid and competent.

Before the request for a review of the matter, the apex court had held and promoted a precedent that for a deed to be competent and relied on as contemplated by section 129 of the evidence act, it must be 20 years old at the date of proceedings. This was the law until February 12, 1971 when the Supreme Court decided to reverse itself.

The court which regretted its earlier position held that for a deed to be competent for the presumption contemplated by section 129 of the Evidence Act, it must be 20 years old “at the date of the contract” in which the deed is sought to be relied upon and not 20 years old at the date of the proceedings in which such a deed is being offered in evidence.

Coker J.S.C. delivering the court’s judgment held that “when the court is faced with the alternative of perpetuating what it is satisfied is an erroneous decision which was reached per incuriam and will, if followed, inflict hardship and injustice upon the generations in the future or of causing temporary disturbances of rights acquired under such a decision, I do not think we shall hesitate to declare the law as we find it.” The court then ordered that the appeal be re-heard de novo by another panel of Justices of the Supreme Court.

This is yet another case in which the Supreme Court took the bold position to set aside its earlier decision. The Supreme Court set aside its judgment delivered in January 8, 1999 on the ground that, it failed to consider the respondents’ cross–appeal before allowing the appellant’s appeal.

The judgment relates to an appeal and a cross-appeal from the decision of the Court of Appeal (Kolawole, Tobi and Ubeazonu, J.JCA. The respondents (“the plaintiffs”) sued the appellants (“the defendants”) in the High Court of Lagos State claiming damages for trespass allegedly committed by the defendants on land at Akesan village sometime in December 1983 and injunction.

The defendants, on their own, counterclaimed against the plaintiffs for a declaration of customary right of occupancy to the land in dispute, damages for trespass and injunction. The High Court (Onalaja, J., as he then was) after taking evidence on the claim and the counterclaim, dismissed the plaintiff’s claim in its entirety.

Early in 2007, Amaechi filed a suit challenging the alleged injustice. The matter went all the way from the lower court to the Supreme Court. In its judgment on October 25, 2007, the Supreme Court held that Amaechi was wrongly substituted with Omehia by PDP and that in the eyes of the law, Amaechi who didn’t contest the election was at all times the legal candidate of PDP at the elections, and proceeded to declare him as Governor of Rivers State.

ALSO READ: ICYMI: Ojukwu Interview (1): The first coup and his battle for one Nigeria

But Omehia re-appealed insisting that the Supreme Court judgment contradicted some provisions of the 1999 Constitution. On November 2, 2009, the apex court dismissed Omehia’s application seeking for review of its judgment. The seven-man panel led by Justice Alloysius Kastina-Alu described the suit as frivolous and an act of judicial rascality.

They accordingly dismissed the case with N100, 000 cost, saying even if it was a mistake; the apex court has a right to make a mistake. They insisted that Amaechi remained the legitimate governor and that the decision was final regardless of whether it was rightly or wrongly entered.

After he was sacked by the Supreme Court as the Governor of Anambra State, Senator Andy Uba twice approached the apex court to reverse its judgment. On the first occasion, Uba filed his application alongside INEC and the governorship candidate of the Nigeria Advanced Party, NAP, in 2007, Mr. Ifeanyichukwu Okonkwo, seeking to set aside its earlier judgment delivered on June 14, 2007, which declared Mr. Peter Obi as the legal occupant of the Anambra State Government House.

Reasoning that it was an effrontery to ask it to reverse itself in a case it had determined, the apex court descended heavily on the plaintiffs with vituperations. In a unanimous judgment, the court did not only dismiss the applications filed by the trio, but the panel of justices presided over by Justice Iyorgher Katsina-Alu concluded that hearing the applications would amount to chasing shadows or “embarking on a wild goose chase.”

The second time Uba attempted to push his luck again at the apex court was through his lawyer, Mr. Joseph Daudu, SAN, who was then the President of the Nigerian Bar Association, NBA. Of course, he received some serious bashing.

In a more recent case, involving candidates of the All Progressives Congress, APC in Zamfara and the Independent National Electoral Commission, INEC, the Supreme Court was again asked to reverse its earlier decision nullifying the election of all candidates of the party. Precisely on May 24, 2019, the Supreme Court in a unanimous judgment of the five-man panel led by then Acting CJN, Justice Tanko Muhammad, declared the first runners-up in the 2019 general elections in the state as the winners of all the posts earlier declared to have been won by the APC and its candidates.

Justice Paul Galinje, who read the lead judgment, upheld the decision of the Sokoto Division of the Court of Appeal to the effect that the APC did not conduct any valid primary election and as such had no candidate for any of the elections in the state.

He described the votes polled by the APC candidates in the elections as wasted. He then ordered that the party and the candidates with the second highest votes and the spread in the various elections were the valid winners. With that, the APC lost the 36 elective positions comprising the governorship, deputy governorship, three senatorial, seven House of Representatives and 24 House of Assembly seats to the PDP.

Still not satisfied with the decision of the court, the party filed an application asking the Supreme Court to review the judgment. But the Court threw away the appeal. Justice Rhodes-Vivour in his lead judgment held that the application was incompetent and time-barred, adding that the court had no jurisdiction in the matter.

Justice Rhodes-Vivour further held that the consequential orders made were part and parcel of the pre-election matter and it was an abuse asking the apex court to review its judgment or orders. “We don’t seat on appeal over our own decision. We have no jurisdiction over this matter,” he said.

The court also made it clear that no amount of antics and trickery by counsel and their clients will ever make it revisit a case it had earlier decided in May 2014 when it ruled on an application filed by Dr. Dickson Osuala, the counsel to the governorship candidate of the DPP, in Delta State, Chief Great Ogboru, against the election of Governor Emmanuel Uduaghan of the PDP.

It used the opportunity also to send a very strong signal to lawyers that it would no longer tolerate abuse of court processes.

In the matter, which had twice been dismissed by the court and refiled by Osuala, he premised his action on Section 285 (7) of the Constitution which he claimed was fraudulently inserted by the National Assembly. He argued further that since due process was not followed by the National Assembly in enacting section 285 (7) into law, it was wrong for the apex court to have relied on it to dismiss his client’s case.

Justice Onnoghen who presided over the matter talked down on Osuala and advised him not to ever come to the apex court with any application in respect of the case. He blamed the counsel for not properly guiding his client and embarking on a clear case of gross abuse of the court process. The judge told counsel to advise his client to take his case to heaven if he was not satisfied with the court’s ruling.

Another instance where the apex court refused to review its verdict was in the case between Muhammadu Dingyadi of the Democratic Peoples Party, DPP and Aliyu Wamakko of the PDP over the Sokoto State governorship tussle.

The post Precedents: When Supreme Court is asked to reverse itself appeared first on Vanguard News.