Libraries are supposed to be inviting: lines of up-to-date books on shelves, nice ambience and the quietude required for assimilation. But the Cross River State Library in Calabar, the state capital, has nothing in common with what a good library should be, reports NSA GILL

It is indeed a sad tale for the Cross River State-owned library in Calabar, the state capital.

The library is strategically located in the central part of the state capital and can easily be accessed by residents and visitors. Tell a commercial vehicle you want to stop by the state stadium or by Eleven-Eleven round-about or by the library itself, you will sight the library or you will be directed to it by your first inquiry.

It is housed in the old brick wall prisons premises where the late Chief Obafemi Awolowo was detained in the 1st republic around 1962 to 1965 after being accused of treason.

The prison was relocated from that location but the government of Cross River State subsequently kept the history of the place with the bricks wall still standing and a state library building was put in the place, additionally. 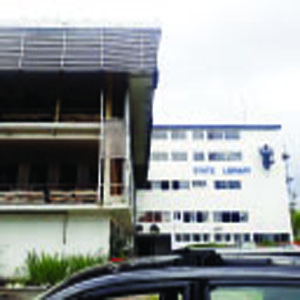 When Duke completed his eight-year tenure of two terms in 2007, the library was still functional. Liyel Imoke took over as governor and did eight-year tenure of two terms till 2015 but by the twilight of his tenure; the state of the library had deteriorated: No regular supply of water and electricity. The supply of relevant books was last recorded in 2008. The conference hall in the premises was no longer functional.

In 2015, when Prof. Ben Ayade took over with Professor Ivara Esu as the deputy governor, it was easy to believe that the library would receive the needed attention and revival. Albeit, that is not the case. The state of the library is deplorable and despicable.

One side of the glass walls of the building is stark open: No glass, no walls. It has been like that in the past four years. Under the rains and in the sun, the reading hall is exposed to the weather.

Rains and sun have exposed the old books and the reading desks to serious dilapidation. Weeds and wild grasses have taken over different portions of the premises. There had been reports of reptiles and rats infesting some sections of the building.

In the pre-2019 election campaigns and manoeuvring, the state government awarded a direct labour contract which saw the application of white paintings on the block wall areas of the building.

Supply of books has not been contemplated by the present administration and patronage by school pupils and other students of various levels is now a bygone.

The civil service management team in the library would not volunteer any information or interview. They were quick to allude to their civil service roles coupled with the fact that the governor recently issued a statement stopping commissioners from making unapproved press statements.

The two persons that can officially talk on behalf of the government are the Commissioner for Information and the Senior Special Adviser Media and Publicity to the governor.

A former Deputy Speaker of the House of Assembly, Hon. Orok Duke, regretted the state of the library has been left, recalling that in the good days of the library, the state government was getting books from various agencies, including the British High Commission.

He noted that besides refurbishing the library, the state government needs to upgrade it to an E-Library. 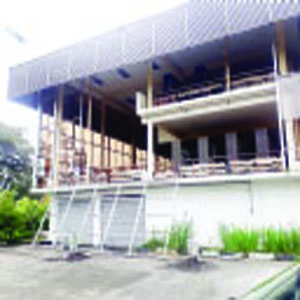 Elvis Inyang, a university graduate in his mid-twenties, said: “Every time I visit Calabar, this place is one of the places that make my heart bleed.

“This place groomed me in my early secondary school days; I loved spending my Saturdays reading here but today it is so sad that this library is so dilapidated and there’s no update on the books.

“Having a library card back then; it was such a big deal; in fact, it was a thing of pride. It’s so sad that my governor is a professor and his deputy is a former vice-chancellor of the University of Calabar, yet this place is nothing to write home about.”

Another respondent, who gave only a single name of his as Odo, said: “This place used to be a calm and resourceful environment. It was our one-click centre of information before the advent of Google and Android phones but look at it today, this is Cross River State library; dilapidated, outdated, abandoned and a shadow of itself.

“The irony is the fact that our governor is a professor who is supposed to value and promote reading habit in its citizenry but the reverse is the case.

“Let the government put all their best resources to make this place functional again, after all, it was functioning before they came on board.”

A civil servant, who pleaded that his name should not be mentioned, said: “It is so disheartening that right before our eyes, we lost so many valuable sites in Cross River State yet nobody is saying anything about it. The number one and number two citizen of this state are academicians yet the place of education in the state still wallows in the twilight.

“My heart bleeds for the future generation because they say readers are leaders but in this state what legacy do they leave for the unborn generation when even the state library is in shambles. Indeed it is so sad.”

Will the Cross River State Library rise again? Only the state government can tell.