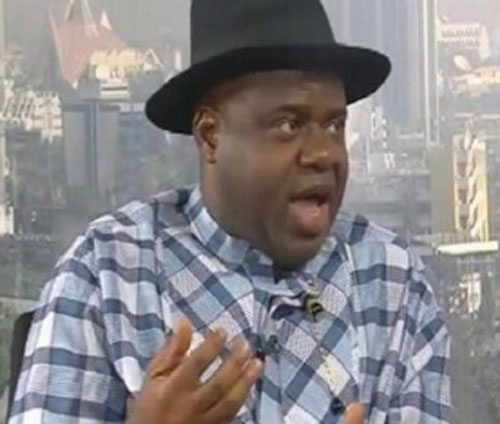 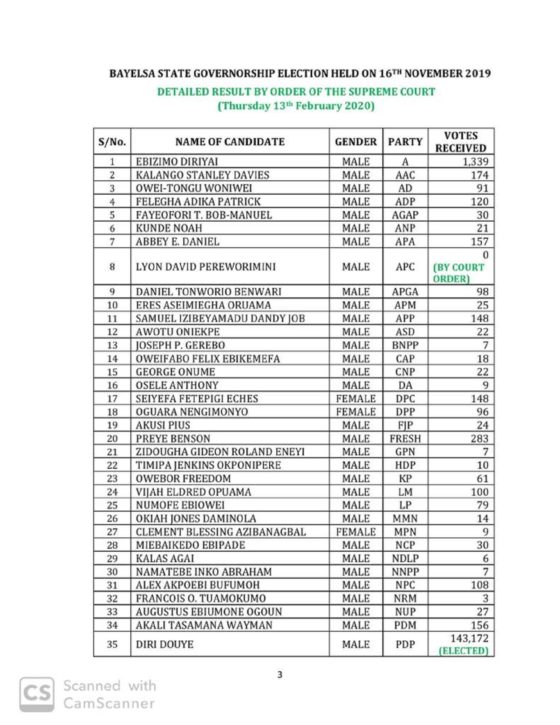 The Supreme Court, in an unexpected turn of event, sacked the All Progressive Congress, APC, candidate, David Lyon, Thursday over alleged misinformation on the certificate of his deputy, Biobarakuma Degi-Eremieoyo.

All is now set for Diri to be sworn-in as the winner of the election.

Directors The Media Ladies and Gentlemen

1. I welcome you all to this briefing. As you are aware, the Supreme Court of Nigeria yesterday delivered a judgement in a pre-election suit on the Bayelsa State Governorship election held on 16‘“ November 2019. The Commission has received the Certified True Copy (CTC) of the judgement of the apex court which disqualified the Deputy Governorship candidate and vitiated the joint ticket of the party earlier declared winner in the election. The Court also ordered the Commission to “…declare as the winner of the Governorship election in Bayelsa State the candidate with the highest number of lawful votes cast with the requisite constitutional (or geographical spread)”.

2. In compliance with the orders of the Supreme Court, the Commission met this morning and reviewed the result of the election in which 45 political parties contested. Without the votes scored by the All Progressives Congress (APC), whose candidates were deemed not to have participated in the election, the total number of lawful and valid votes cast in the election now stands at 146,999. Out of this figure, the candidate of the Peoples Democratic Party (PDP) scored the highest number of lawful votes with 143,172. Similarly, the Party has scored more than 25% of the lawful votes cast in all the eight (8) Local Government Areas of the State.

3. Furthermore, the total number of registered voters in places where an election was not held or cancelled as a result of sundry violations is 90,822. The candidate of the Accord party has the next highest scorer with 1,339 votes. The margin of lead between the candidates of the PDP and the Accord party is 141,833 votes. With this outcome, the election is conclusive at first ballot.

5. The detailed result will be shared with you at this briefing and uploaded on the Commission’s website and social media platforms shortly.

6. The Commission is aware that the tenure of the incumbent Governor of Bayelsa State ends at midnight today Friday 14th February 2020. Therefore, in fulfilment of the

requirement of Section 75 of the Electoral Act 2010 (as amended) the Certificates of Return to the Governor and Deputy Governor-elect will be presented to them immediately as ordered by the Supreme Court.