The Economic and Financial Crime Commission (EFCC) has explained reasons for the choice of youths in its fight against corruption in the country.

The commission said apart from the future belonging to them, the youths were more populated, energetic and resourceful especially in the area of information dissemination and intelligence gathering.

Speaking on Friday in Awka, Anambra state during an anti corruption walk, the Head, Account Recovery and Forteiture, Mike Nzekwe, said the commission was also partnering with the youths through the National Youths Service Corps (NYSC) in the area of whistle blowing.

He said the exercise, which was the first of its kind in the commission, was targeted at mobilising and sensitising the society, particularly the youths on the crusade against corruption.

Nzekwe however regretted the channeling of energy by the average Nigerian youths into negative ventures, saying the EFCC was poised to change the narrative through regular reorientation.

He said: “During a recent investigation, we discovered a Yahoo academy somehow in the South South part of the country.

“A lot of corrupt things are going on among the youths and that’s why we’re engaging them to let them know the dangers of corruption.

“This is the first Nigerian youths walk against corruption. We want to tell the youths that corruption is not a good way of life and also kills. We must kill corruption in Nigeria before it kills us.

“We’re partnering with the NYSC so we can have youth crusaders and ambassadors as well as other stakeholders who will help us champion the fight especially in the area of information dissemination and intelligence gathering to ensure corruption is nipped in the bud.”

State Coordinator, National Youths Service Corps (NYSC), Mr. Kehinde Aremu, said the corps members had been supportive to the anti-corruption fight after being introduced to the crusade during their orientation course programme.

He expressed optimism that the institutional collaboration with the EFCC would further assist them to take ownership of the anti-graft war. 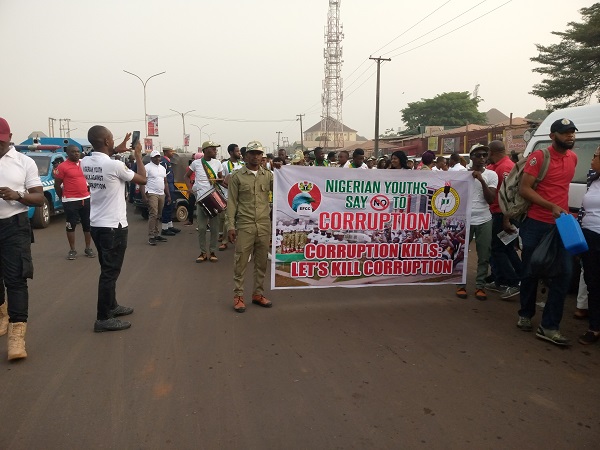